Today’s theme is school-ish stuff! Of varying types. And luckily for you, it’s mostly positive!

I say that, but I need to get the crap out of the way first. 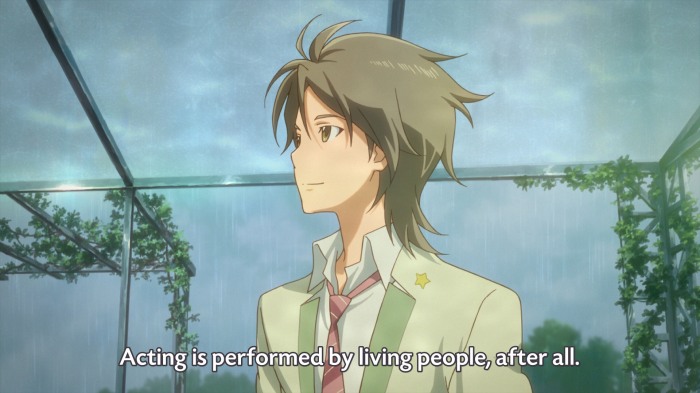 Let’s talk about cell phones. They’re convenient, but can certainly be a distraction from daily life, school, or work. Now, picture this – a movie where the main plot seems to be about a high school student council’s contrived efforts to ban cell phones, to the extent that they somehow get the administration to agree to suspend students who break the rule. And then there’s some overblown bit about a girl who doesn’t come to school because of a cell phone-related incident, yet it’s never so much as implied what happened.

And then you have the generic protagonist who is special for some poorly explained reason, the childhood friend who has unrequited feelings for him, the love interest who is sort-of interested but has her eyes on someone else, and the apathetic guy who is basically a plot point more than a worthwhile character. The drama is bad, the cast is composed of lovesick morons and brick walls, the supernatural elements of the story feel like they come second to the failed attempts at romance, they shoehorn in a cheap attempt to recreate the Shinji/Kaworu dynamic from Evangelion, and I’m pretty sure that my head bounced off my desk a few times. The ending was pretty bad too. And by bad I mean stupid and random.

But at least it looks good, and the supercell theme is excellent. Those make up for everything else, right?

Choral music isn’t quite my cup of tea. Or rather, a cappella isn’t. When a performance consists of solely vocals, it tends to lack impact, variety, and a general pleasingness to the ears that instruments can more easily provide. And things just continue to head downhill when a group attempts to emulate instruments via singing. Like Van Canto. Blegh.

Tari Tari does things a bit differently. While the main five characters are in a chorus/tennis/etc. club, the show’s attention is not only on singing, but the composition, lyrics, instrumentation, and more. Even for their definitive song, Radiant Melody, they sing lead vocals, the proper school chorus sings backing vocals, and the wind ensemble provides full instrumentation. While the core of the music is something I could generally do without, the implementation is extremely successful within the mix of all elements. Of course, there’s plenty more to the show than just music.

I don’t like most coming-of-age stories. Reading Catcher in the Rye in high school was one of the most painful experiences of my life, and people generally treat that as the definitive one. But once again, Tari Tari does everything a bit differently – it does things right. Some of the characters have ambitions they’re pushing for, and some don’t quite know they want yet, but none of these include delusions about saving kids from running off a cliff. The characters face their futures in the world of adults without extraneous drama, with interesting progressions, and an overall sense of understanding their positions and desires. While the music plays a very big part in my enjoyment of the series, the story carries itself well by its own merits.

Recommendation – If you’re into music anime or are looking for a fairly light drama, watch it.

Where Tari Tari does a great job of merging music and drama, K-ON! does an excellent job of merging slice-of-life and music. While the show is about a light music club, the general focus is less on the practice and performance, but rather the daily shenanigans of the members. And on that note, this show has one of my favorite main casts of anything ever. From Ritsu and her sexy forehead to Mugi and her puffy eyebrows, Mio and her bass skillz to Yui and her appreciation for eating watermelons with a spoon, Azusa and her cat-like tendencies to Sawako’s insistence on questionable outfits, they make every single episode enjoyable.

The first season is a bit weaker than the second, but is still absolutely good. The only real issue is that it takes a bit for all of the character dynamics to be set up and engaged at full effectiveness, particularly as a result of Azusa joining the club later. However, once the setup is complete, the second season pulls out all of the stops and offers slice-of-life perfected. More or less. It’s actually a bit sad how mediocre the source material is in comparison. And then there’s the movie… well, that’s a story for another day. Let’s just say that the movie’s ending was perfect, whereas the manga’s was garbage.

And of course, since it’s a KyoAni show, it looks great, especially in the second season (and movie). The first season’s biggest problem is a lot of “side-mouth,” but the second tended to avoid this and had better consistency. The music is good too, even if you hear Fuwa Fuwa Time far too much. The second season in particular had a substantial chunk of music recorded, but never utilized in-show – Honey Sweet Tea Time was referenced but never actually performed, Samidare 20 Love was only used for the movie, and several others never ended up in the series at all. At least the albums are out there for those who want the music.

And most importantly, Ritsu > Mugi >> Mio >>> Yui > Azusa. I do like Azusa and Yui, just not nearly as much as the other three.

Recommendation – If you even remotely like slice-of-life shows, watch it.

If you trace back my anime-watching history to its roots (ignoring stuff I watched in elementary school and earlier), you’ll find me watching random “funny moments” compilations from School Rumble on YouTube. I have no idea how I stumbled upon them, but shortly thereafter, I watched the entirety of the show. Before too long, I was reading the manga and checking what anime were on Netflix, then eventually looking for suggestions online and delving into “other means” for the series that weren’t readily available. Of course, five years later I can look back at School Rumble at the root of it all, and say that it’s still a favorite.

For a comedy series, there is a sillily large cast (yes, “sillily” is a word – I checked). Most of the members of class 2-C get some degree of attention, along with several members of 2-D and a handful of underclassmen. This makes for a love polygon that seems to push the limits of two-dimensional shapes. However, there are distinctly two main characters – Harima Kenji and Tsukamoto Tenma. Kenji is a delinquent who fell in love with Tenma. He is also an idiot. Tenma is a normal girl with weird hair who fell in love with the mysterious Karasuma Ouji. She is also an idiot. That’s a common trend. Of course, rather than idiotic characters causing painful drama, these idiotic characters add to the comedy with their misunderstandings, strange assumptions, and generally bizarre behavior. And that makes it all worthwhile, especially with stuff like the school play. Or the survival game. Or most other episodes.

Unfortunately, the show does have many issues, most relating to what isn’t present but should be. The “3rd semester” special, which includes what would be the final two episodes of the theoretical third season, feels completely out of place when missing 24 episodes of context. No proper third season means that a lot of material from the manga never ended up animated, most notably the Kyoto trip and actual progression (sort of) on a few romantic fronts. The second season came to a close with plenty of open ends, and the only real solution is to read the manga (which I would still recommend). As for problems with the show as-is, it’s mostly a surprising amount of “filler” episodes that have no bearing on anything at all – they aren’t even side content, but more pointless what-if content. Sure, they include some laughs, but that’s all they’re good for. Even taking those into account, the show is well worth a watch if you’re looking for an easy laugh.

Recommendation – Watch the first two seasons, ignore the “3rd semester” completely. Then, if you like the show, read the manga for the full story.

In many ways, I value subtlety over clear-cut details. And yet in many ways, Prison School usurps that notion in the best way possible. I’m not entirely sure why I even decided to watch this show. The absurd fanservice doesn’t appeal to me, I’m not really a fan of ecchi series to begin with, and most discussions about this seemed to focus on the TV airing’s censorship more than anything else. In spite of all of those elements, I thoroughly enjoyed the show – anything that gets me to laugh so much that I can hardly breathe is clearly doing something right.

The concept alone is completely ridiculous – for “peeping,” the only five male students of a newly co-ed high school are confined to a special on-campus prison and forced to labor under the supervision of the “Underground Student Council” for the duration of their incarcerations. Their primary guard is the vice president, endowed with exaggerated features and wearing clothes about ten sizes too small. The other members are the more realistically proportioned president, and Hana, who may have a urination fetish (see above). And for the main characters… they’re all extreme masochists. And idiots.

What this show does best is its bizarre and always over-the-top humor. I’m pretty sure this was the first time I ever heard a joke about hemorrhoids, but I fell out of my chair laughing at it – the way things are built up yet still manage to hit you with completely unexpected impact is pretty awesome. The general approach is on these build-ups with unexpectable pay-offs, which nearly always succeeded, even if some of the smaller jabs and over-sexualization never added much. The one detraction would be how ludicrously the girls, particularly the vice president, are sexualized. I understand the overall role of this in the humor and story and everything, but I’m not into it most of the time. But otherwise? It’s a great show.

Also, the chairman is best girl.

Recommendation – If the extremes of the show’s presentation aren’t off-putting for you, definitely watch it.