It’s been quite a while since I’ve written an anime review, so I figured I’d throw this in for the time being. Rather than “formal” reviews, these are like miniature rants. But I do have some good things to say. Some.

The next full review I do may be Hibike! Euphonium, but I’m waiting for the BD release of that so I can rewatch it. Otherwise, I don’t have any specific plans for the time being. 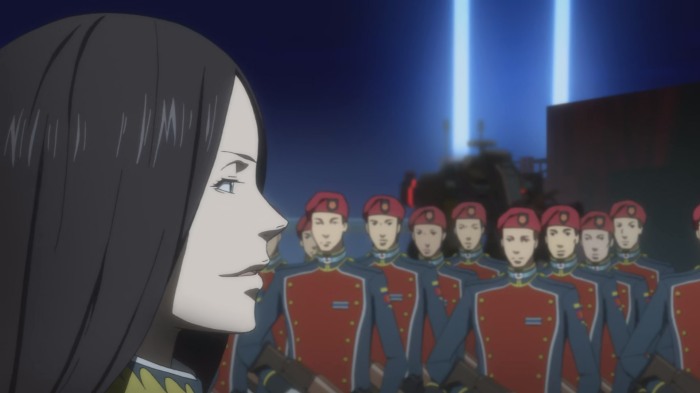 After Psycho-Pass 2, I didn’t expect anything good out of this movie. It didn’t matter who was writing it, it didn’t matter who was directing, it just didn’t matter – my expectations were about as low as they can be. Originally, the only reason I decided to suffer through Psycho-Pass 2 was to get to this, knowing that the writer of the first season was in charge of the movie. But once I’d gone through the absolute crapfest of the sequel, I didn’t really care anymore. I just wanted to watch it to get it over with.

This is basically a blegh Hollywood action movie that just happens to be the sequel to the two seasons of Psycho-Pass. Although the only purpose of the second season was… Shimotsuki being in this? And still not dead. There’s really no concrete thread between the second season and this movie besides Shimotsuki making some stupid comments, because she’s pretty stupid, but it’s more related to the first season and Kougami. Even taking that into account, it’s not anything special.

Kougami’s actually here, so it finally feels like the first season is getting the continuation the second season couldn’t remotely provide, but his role, Akane’s role, and the general progression of the plot are just boring. There are explosions and stuff, sure, but the story never goes anywhere interesting.  The conclusion of the main conflict just acts to set up potential sequels, but the way it’s done isn’t particularly engaging. And even the direction it brings the story doesn’t remotely get me excited for more from the series. It really feels like a half-assed way to follow up an interesting cyberpunk series. Oh yeah, and the new enforcer has something like one line in the entire movie.

Recommendation – If you made it through the second season, you might as well watch it. Otherwise, you’re not really missing out on much. 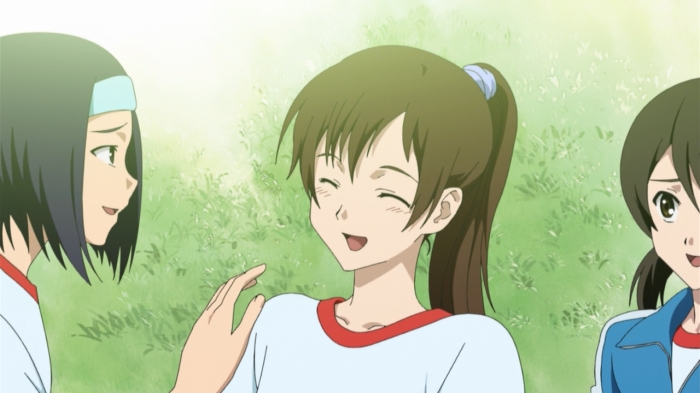 After realizing that I had unintentionally watched most of PA Works’ shows, I decided to just aim for all of them. Of course, where Shirobako and Tari Tari showed the best they could manage, Glasslip serves as the opposite, so at least I’m not going to set my expectations too high for any of them.

As for True Tears itself, it’s an average romance story in just about every way possible. Weird love polygons? Check. One eccentric potential love interest? Check. Drama? Check. Ponytail girl is best girl? Check. The best I can say about the show is that it wasn’t as melodramatic as many other things I’ve seen. Characters are fairly realistic with how they approach things, and in many cases I can actually understand where they’re coming from. Even if it does just lead into more drama.

My biggest problem is that it spent a lot of time doing nothing. I’m normally pretty good about keeping my attention on what I’m watching, but there were many points where I just turned away from this and put my attention elsewhere for a bit. And when I came back, I never felt like I missed anything worthwhile. I don’t regret watching it, I just would have preferred if it was more focused.

Recommendation – If you like drama, you may enjoy it. Marathoning it may not be a good idea. 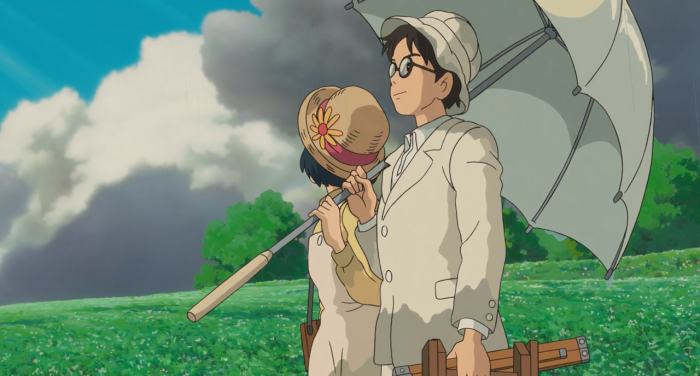 I can sum this movie up pretty easily – two hours passed, but it didn’t feel like much happened. It’s the story of Horikoshi Jiro (sort of) and his life leading up to the invention of the “Zero” fighter plane used by the Japanese in World War II. Except that even from a historical/biographical standpoint this movie doesn’t hold up because of the excessive creative liberty concerning his personal life. Even ignoring the inaccuracy of nearly everything about his life, the story never goes anywhere. It ends without delivering any type of effective climax, instead just showing events pass by.

As for the presentation, it’s typical Ghibli. Whether or not that’s a good thing depends on the specific viewer, but I couldn’t care less about Miyazaki or the studio’s reputation. It looks fine, and the music is good, but what really stood out to me were the laughable “sound effects” for the earthquake, airplanes, and a few other things. Instead of utilizing authentic sound effects, what they did is have people voice them. And it sounds horrible. If this were a kid’s movie, I wouldn’t really comment on this, but in the context of a story about the guy who designed the Zero fighter, it just can’t be taken seriously.

This is one of the most forgettable things I have ever watched. Nothing noteworthy happens, whatever message was intended doesn’t come through, and I got more interesting information out of reading Horikoshi’s Wikipedia page than I did from this movie. And Hideaki Anno’s voice acting in Shirobako was better than in this movie. I’m not even joking.

Recommendation – If you really like Ghibli movies, you’ll probably enjoy it. Otherwise, don’t waste your time. 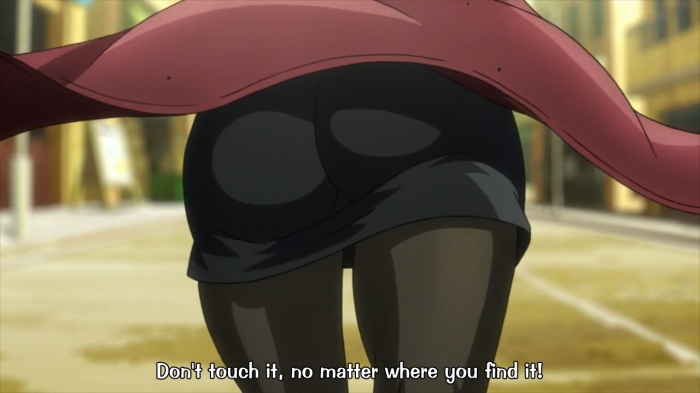 Just when the series showed how bizarre it could get, Stardust Crusaders decides to pop some acid and take things up another notch. Rather than vampires, strange stone masks, and seemingly invincible “pillar men,” this introduces Stands, which are semi-physical entities that are extensions of their users. Think of it this way – they’re ghosts who are your friends, are a part of you, and are pretty good at beating the crap out of your enemies.

I really liked the characters, especially Joseph, Polnareff, and Iggy, whereas Jotaro is nowhere near as fun of a protagonist as a young (or even old) Joseph. He’s certainly “cool,” but his hat-hair is confusing and a lot of what he did lacked the ridiculous pizzazz Joseph had provided. Even if there is still some nice posing. Not as much though. My biggest complaint is the length, particularly of the first half. The tarot portion just started to drag on after a while, whereas the Egypt arc offered more creativity and more progression in the story rather than just on a map.

Some of the Stands and “battles” were very interesting, most notably the D’Arby bouts and, what really made the show, Dio’s World. Part 1 showed just how much of an asshole Dio was, and having everyone travel halfway across the world just to murder him was pretty nice. I still prefer part 2, Battle Tendency, but this was a very cool conclusion to Dio’s story, and now I’m excited for part 4, Diamond is Unbreakable, which was recently announced to be getting an adaptation. And a lot of people seem to say that and part 7 are the best.

As far as ending themes for the series go, Oingo Boingo > Roundabout >>>>>>>>>>>>>>> Walk Like an Egyptian > whatever the hell the main one is for the Egypt Arc. 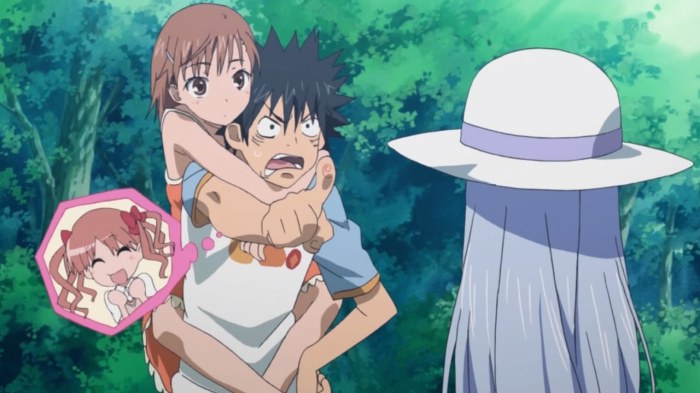 A Certain Magical Index is one of the most complicated shows for me to discuss, mostly because of its role as the parent series of A Certain Scientific Railgun. To be fair, a lot of people say the anime is a bad adaptation, so maybe the books are better. I’ve only read the first two, so I can’t really comment.

90% of my problems stem from the protagonists – Touma and Index, who are pretty much my least favorite main characters of anything ever. Touma’s modus operandi is just to punch people in the face (which is the one good thing he has going for him), but his unique ability gives him built-in plot armor, his personality is so obnoxiously self-righteous it makes me want to throw up, and he’s a complete idiot. And Index is just a plot device that never actually adds anything besides some awful attempts at humor, and she basically becomes irrelevant after a while. Once you add in the mediocre plot, the show is average on a good day, and painful on others.

I’m always baffled when people say Railgun is inferior. Sure, the Railgun adaptation has too much anime-original stuff that isn’t anything great, but it’s still far better than Index. Especially when the Sisters arc feels so inconsequential in Index compared to Railgun S – it does not feel like an event that should have been shown solely from Touma’s point-of-view, as it just makes him look like a meddling loser who can’t help sticking his nose into other people’s problems (which is exactly what he is). In fact, the one time that I actually sort-of kind-of like Touma is in the Sisters arc in Railgun, as his role in the general goings-on makes more sense from Misaka’s perspective, and what he actually adds to the story is really cool when you can actually see the full picture, not just his tunnel-vision perspective.

Misaka, Kuroko, and Accelerator are the only reasons the second season is even worth watching – they offer the highest points of the series, whereas Touma and Index provide the abysmal lows. And why is the music always so LOUD in the first season?

Recommendation – Watch the first four episodes of Index, then watch the entirety of Railgun (both seasons). Then come back to Index if you’re interested in more.

Most stuff this time around just ended up being average-ish, which wasn’t specifically intended. This was just a selection of stuff I’ve watched semi-recently. And then Index. 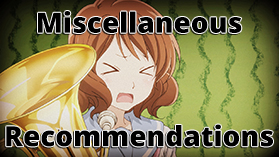