There seems to be a common theme among a few things I’ve recently talked about or intend to relatively soon – they butcher the English language. This is no exception, as it is merely due to an awful translation that manages to alternate between being utterly incomprehensible and strangely hilarious.

And, if the featured image didn’t clue you in already, there is some cursing that is poorly censored. FYI.

According to the interwebz, this Vietnamese version of Pokemon Crystal Version is a bootleg version of the game that was translated from Japanese to (at least) Chinese, and then to English. Because of this, the game is hilarious.

Let me clarify what’s going on here – every time you receive an item, it will show “[Your character’s name]! [Item you received] [where the item goes] F—” Every time. While this is the only instance of swearing I’ve come across in the game, there are plenty of other bastardizations of English. 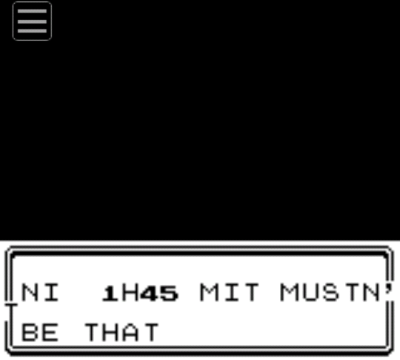 So it’s easy to see that this game has some issues in the language department. Besides the fact that item and attack names cannot be easily related to what they should actually be, things such as the radio quiz are absolutely impossible to understand. For another example, the Sprout Tower is called four different things – Madapo Tower, Baiming Tower, BM Tower, and Madsimumi Tower. Why? I don’t have a clue.

The only bug I’ve come across is when attempting to take part in the bug-catching competition (or rather, the “grasping worm games” as they call it) – the game is pretty much guaranteed to crash.

UPDATE: Apparently Pokemon vanish if they’re in the PC for too long. I’ve had it happen to three now.

Here are some other gems from the game, and you can see even more here. This was the hardest I’ve laughed in a very long time.

“I AM VERY DISGUSTED WITH THE TRASHY MAN. IN SPITE OF THE MONSTER, AND THE COACH, ONLY TRASHY, I WILL BEAT DOWN THEM ALL. FOR THIS I MUST STRENGTHEN MYSELF. THE MONSTER IS THE SAME TOO. COLLECT ALL THE TRASHY, RIGHTEOUS FELLOW ALL ARE UNPARDONABLE! YOU DON’T AFFECT ME. THE TRASHY STROLLING IS AN EYESORE!”

“I WILL BE RUDE TO YOU IF YOU DISTURB OUR WORK”

“THE MONSTERS, AS THE PEOPLE, ONLY LIVES, SOMETHING WILL HAPPEN, I HAD TASTED EVERYTHING, I FELT SAD. AS YOUR PREDECESSOR, I SHOULD TEACH YOU. BEFORE YOUR WERE BORN, I HAS BEEN TOGETHER WITH MONSTERS. BECAUSE WE HAVE THE SPIRIT NOT TO LOSE ABSOLUTELY, WHETHER OR NO, AND WE ARE CALLED “WINTRY POPLAR AND WILLOW” TO SEE MY MIGHT”

“IT IS SAID THERE IS A SPIRIT IN THE FOREST. DON’T SERVE THE DEVIL!”

“THERE ARE TWO KINDS OF MEN IN THE WORLD, SAVVY AND NOSAVVY WHAT KIND OF YOU?”

“THE TOWER IS BUILT FOR POCKET MONSTERS TO PRACTISE BUDDHISM”

If you want to take anything out of this game, just remember – “YOU CAN’T THROW THE BUTT CASUALLY”