Note: If you’re looking for my review of the movie itself, go here.

Last year, December 7th. Armed with a bottle of Dr. Pepper and a small container of daifuku mochi, I set out on a journey to a nearby city. The purpose of this journey? To see an anime film in a theater. An anime that would turn out to be one of my favorites of all time.

Following that fateful day, I pre-ordered the most important purchase of the decade (so far) – something that altered the balance of the universe.

Okay, so the story of how I got this is not quite as interesting as last time, but regardless, here you go:

As the title would suggest, this is the Mahou Shoujo Madoka Magica The Movie: Rebellion Limited Edition BD+CD set. This will be a review of the product itself, not the film; however, I may review the anime itself in the future.

While the first two Madoka Magica movies were simply the original TV series with improved visuals and audio compressed into two films, Rebellion / Hangyaku no Monogatari is a completely new sequel. This set contains a blu-ray disc with the film, a blu-ray disc with several hours of extras, a CD with the entire movie’s soundtrack, a “material book,” and an external bonus of some kind that changes depending on when or where it was ordered. At the time of release, this limited edition set is 9500 yen or about 95USD.

The main blu-ray disc includes the film (which is about 2 hours long), the textless opening and ending songs, and subtitles in both Japanese and English. The movie has audio in stereo, 5.1 surround, and a commentary track from the main voice actresses (which is not subtitled). It was a bit odd to see that the subtitles were limited to Japanese and English – the release of the first two movies had subtitles in Japanese, English, Chinese, Korean, French, and Spanish as well. And if you have a surround sound system, take advantange. Trust me, I know what’s best.

The extra disc was a complete surprise to me – I knew it would be in the set, but I had no idea what to expect on it. Suffice it to say, I was surprised with the contents. The extra disc contains the entire film with the first take of Homura’s lines, a 2 hour special originally aired on TV Tokyo that is a recap of the TV series/first two movies, TV commercials and previews for the movie, and the Madoka Magica x Monogatari Series cinema intros (that were apparently written by Nisio Isin, author of the Monogatari Series). There are no subtitles on any of these extras, Japanese or otherwise.

For the most part, the only things on the extras disc that I was interested in were the four cinema intros, one of which I had already seen when I saw the movie in December. The first take of Homura’s lines seemed like an extra that should have been included on the main disc, and I would much rather rewatch the series or first two movies than bother with the recap. 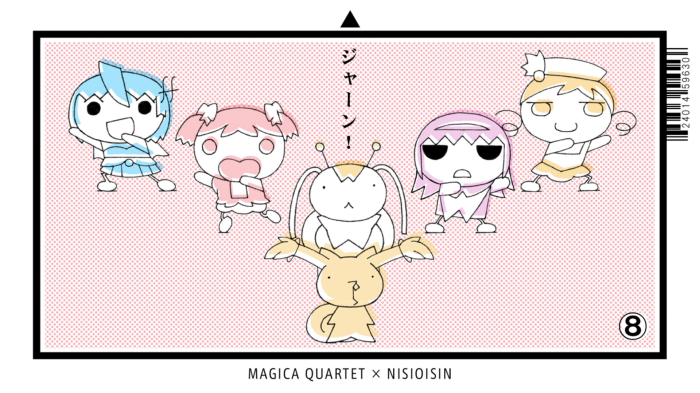 And just to clarify – both of these series are made by Studio Shaft and directed by Shinbou Akiyuki, so the crossover isn’t quite as odd as it might originally seem.

One of the coolest things about the set is the “material book,” which is generally the same type of thing as what the limited edition set for the first two movies had; however, this time there are plenty more interviews. There are interviews with Shinbou Akiyuki (general director), Miyamoto Yukihiro (director) and Sasaki Shinsaku (storyboards), Taniguchi Junichirou (character design and animation director) and Yamamura Hiroki (animation director), Tsuruoka Youta (sound director), and Kajiura Yuki (music composer). So there’s a lot to read if you can understand Japanese. I’ll bludgeon my way through one of these days.

Update: English translation of the material book here. THIS INCLUDES SPOILERS, SO DON’T READ THIS IF YOU HAVE NOT SEEN THE MOVIE.

In addition, there are also a story summary, art, storyboards, a bit of key animation, and a message from Urobuchi Gen (the writer). In total, while there are definitely some nice things to look at in the book, you need to be able to read Japanese to get the most out of it. Speaking of, if you can read Japanese but haven’t seen the movie yet, I would suggest moving by the following images quickly – for all I know, there are spoilers written in there. I avoided obviously spoilerific images. 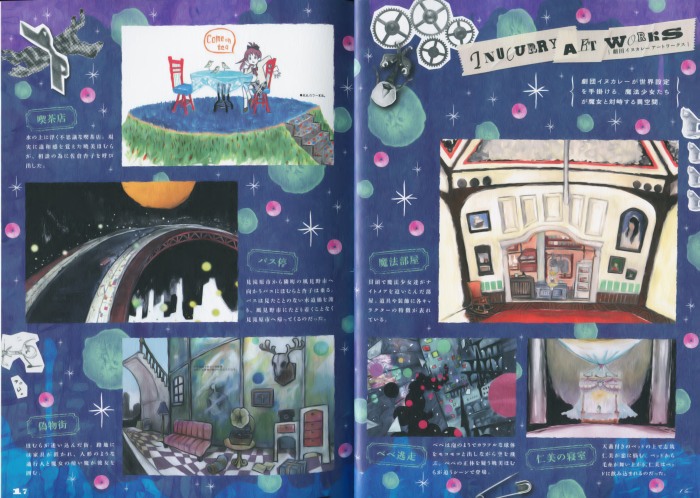 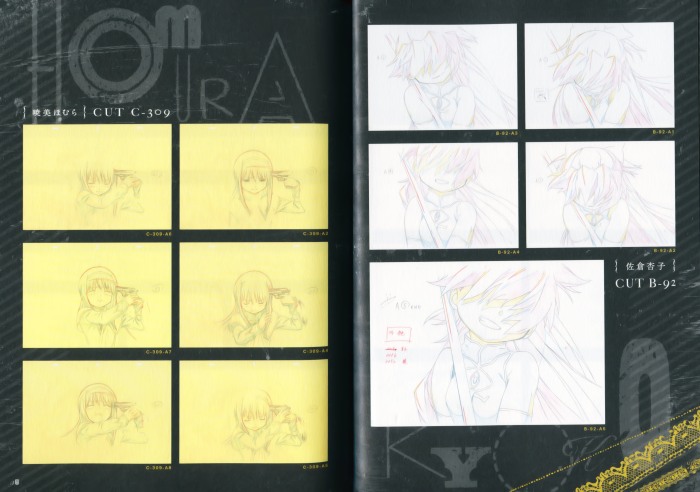 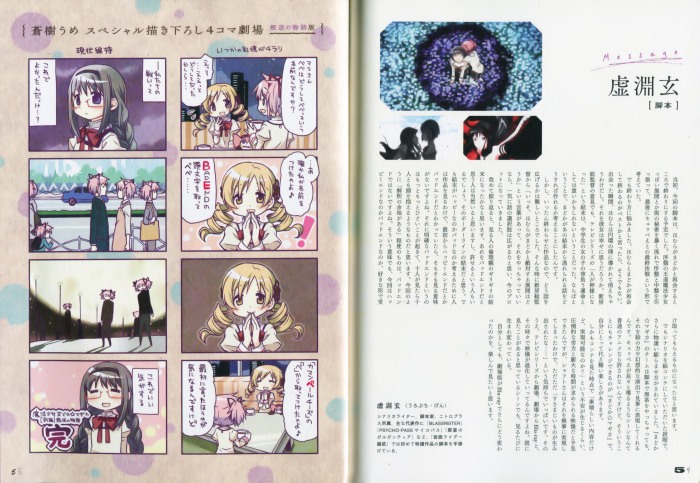 While the music wasn’t really something that stuck in my head after seeing the movie last year (mainly because I was busy thinking about the ending – more on that later), I can say that it is perfect now that I’ve rewatched the movie and listened to the soundtrack by itself. While the general vibe is significantly different from the series/first two movies, it’s appropriate for the mood(s) of this film. The soundtrack has always been my favorite part of this series (and my favorite in general), and this did not let me down.

And lastly, since I ordered from CD Japan, I got a poster with my copy. This obviously isn’t a picture of mine, as I put it back in the tube for future use.

Now, to a topic a lot of you are probably more interested in – the film itself. I adored it, but it’s difficult to discuss it without including heaps of spoilers. I may review it properly in the future, so look forward to it (maybe).

Now, on the story… There are basically two parts of it that are always discussed – the first half hour, and the last twenty minutes. While I was merely confused at first, the first half hour does its job well, although I don’t want to set up expectations for you on what I mean by this. The ending, on the other hand, can best be described as polarizing. Personally, I loved the ending as a conclusion to the series, but I can easily understand why others dislike it. While I left the theater a bit conflicted, I was able to gather my thoughts pretty quickly and realized how much the ending actually made sense.

My favorite part of the movie is, without a doubt, the Homura vs. Mami fight, which is probably my favorite anime fight of all time. Holy crap that was awesome. Now that I’ve finally had the chance to rewatch it, I can safely say that this is one of my favorite films of all time, anime or otherwise.

And let me just clarify one thing – I think that anyone who compares the ending to End of Evangelion is blatantly wrong. While the “why” of the ending is understandable without mental gymnastics, the “how” is the vaguer issue. Either way, the ending isn’t some metaphysical ball of unexplained garbage, but simply the result of character decisions. And Rebellion actually has a happy ending. Maybe.

So, to my relevant recommendation – if you haven’t watched Madoka Magica before, I’d highly recommend it (preferably via the blu-ray release of the TV series). If you’ve already seen and enjoyed the original series and/or the first two movies, you should definitely watch Rebellion.

My recommendation concerning the set itself – just like the limited edition set for the first two movies, this one is definitely worth it… sort of. You’ll be paying about 95USD for a single movie, compared to 95USD for two. So, if you’re a big fan of the series and are interested in the included extras, then pick up the limited edition set, preferably somewhere that you’ll also get an external bonus of some kind. If you don’t have any interest in all of the extras, then just pick up the regular version of the movie on blu-ray. Because this looks and sounds too good to be limited to DVD quality. And besides, according to CD Japan, the DVD release doesn’t even have English subtitles. And Rightstuf doesn’t even carry the DVD version.

Today, I just got something in the mail relevant to this – the program guide for the film, which was only $12 from Rightstuf. With this being in the picture, my recommendation changes a bit. 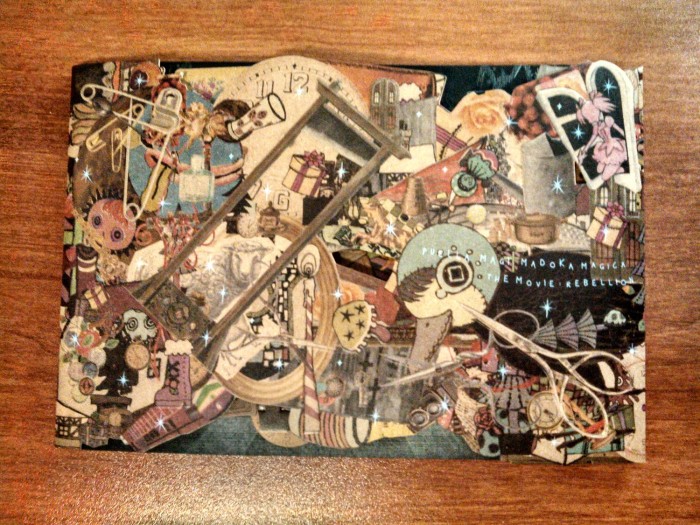 In general, this is along the same lines of the material book included with the limited edition of the movie, but it is also a bit different – it is much larger, has better paper quality, has different interviews, and features different art.

Recommendation – If you’re not interested in the extra discs of the limited edition BD set and would prefer to buy the basic movie, this program guide is a great and relatively inexpensive alternative to the material book.

I got the scans from the same place I got the edited subtitled track I used to watch my own encode of the movie, but I don’t remember where that was. Woops. Half of my reason for not using the default subs was so that I could edit in ‘Hellspawn’ every time someone said ‘Kyuubey’ or ‘Incubator.’