Since Persona 3 is one of my favorite video games, I recently considered doing a review or thoughts post – unfortunately, I left my PS2 at home after break. So, I finally snapped and got Persona 3 Portable, the PSP port of the game (also available for Vita via download) – so, this post will be similar to my initial thoughts on Persona 4 Golden. However, this time I am far more familiar with the original, so I can make stronger connections.

Persona 3 follows the story of your character, who is an orphan that joins a new high school and begins living at the local dormitory. During the full moon a few days after arriving, mysterious and hostile things called Shadows emerge during the Dark Hour, a period of time hidden between days that only a select few are aware of. Left with no other options, the protagonist summons a Persona, a hidden facet of themselves that grants him or her the ability to combat Shadows. After joining a group of students who explore the mysterious labyrinth called Tartarus, he or she searches for the source of the Shadows and a means to stop them, all happening parallel to a school year spent developing bonds with classmates and others in the city.

Something worth mentioning – the manner in which the characters summon their Personas has been the source of a bit of controversy, and is without a doubt the primary reason for a ‘Mature’ rating in the US. They use items called Evokers, which look and function like guns, and shoot themselves in the head with them. This probably sounds crazy, but the only purpose they serve is to facilitate the summoning of Personas – they do not fire bullets or anything of the sort. There isn’t quite a literal theme of suicide in the game, but I’m not going to go into detail on this topic – a proper review would likely have more info if you’re interested.

The most obvious change to P3P from the original version of the game, and the main selling point, is the option of a female protagonist, who the fandom tend to refer to as “Hamuko” or “Minako” (I’ll refer to her as Hamuko). If you choose to play as her, there will be several changes to the game, although the main story will remain the same. The most noticeable would be the social links, as the developers weren’t going to be so lazy as to force her strictly into yuri pairings with the same potential love interests as the male protagonist (although I’m sure there are people who would prefer it that way). One of these social links also has the potential to change a character’s role in the main story – if you’ve played P3 before, you might be able to guess who.

To go into a bit more detail on social links – if you have played P3 before, expect something completely different for the female protagonist, because that’s what you’ll get. While the male’s social links are all the same as they were originally, even including the Aeon link from FES, the female’s feels like a new experience. While the old couple, Bebe, and a few others carry over from P3, the potential romances and several others are changed – for example, a few main characters who didn’t have social links originally, now do, and this adds a lot to their character. Another example is the Chariot social link – rather than being with Kaz on whichever sports team you join, it will be with a new character, Rio. “It seems that this school only has a men’s swimming team.” Disappointment.

Changing the color theme from blue to pink is a bit disorienting at first, but a new palette does give the game a bit of a different vibe, for better or worse. I also like how they changed Hamuko’s default weapon to a naginata rather than the male protagonist’s one-handed sword. Some events are also changed – rather than a “babe hunt” on the beach, the female character will inevitably do something else instead (I’m not at that point yet). I am curious to see whether the dynamic between the protagonist and Aigis has changed as well, but I won’t get to their meeting for a long time. You also have the option to pick an alternative Velvet Room assistant, named Theodore. I picked Elizabeth again anyways, but that is purely out of bias mostly resulting from her extremely spoilerific route in Persona 4 Arena. As the male protagonist, you don’t have the choice and are stuck with Elizabeth – this seemed like a really strange decision.

If you play the game as the male protagonist, the music will be the same as it was in the PS2 version. However, if you play as the female protagonist, much of the music has been changed. It was inevitable that there would be new music for this version of the game, but I’m not fond of the results. I don’t care for the new opening theme, and I’m not a fan of the new after school and “around town” tracks. And the battle music! The default theme for Hamuko is not Mass Destruction!!! WHAT WERE THEY THINKING? In fact, the audio experience as a whole is rather disappointing, as the audio quality for character voices is surprisingly low. While I don’t notice this much without headphones, I’d imagine it’s either the same quality the audio recordings were in the PS2 version, or they needed to reduce the size to fit the entire game on the PSP disc. Since a DVD can hold up to 9GB, but a PSP’s disc can only hold up to 1.8GB, it’s obvious that some changes would be necessary.

On that topic, a lot of the changes to the game seem to be based around the necessary size compression. The most noticeable and disappointing result is that, rather than walking around from point to point in the city, you take a click-and-go approach – however, you and your teammates will still walk around Tartarus in the same manner as the PS2 version. While the fast travel from location to location is nice (a la Persona 4), the lack of character movement really takes away from the experience. This problem carries over into plot events, social links… after playing the PS2 version, it’s impossible to look away from the issue. 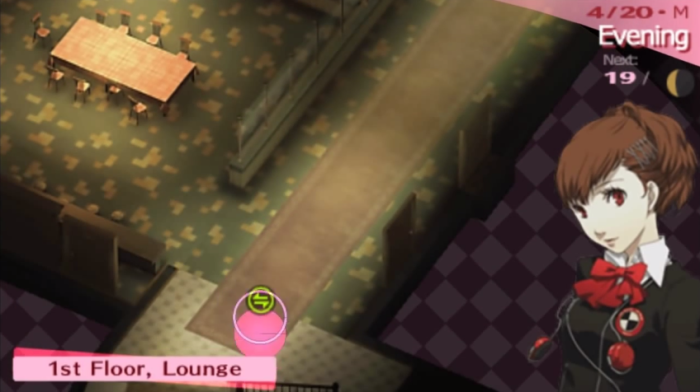 Along with movement being reduced to this bare minimum, the animated cutscenes and movement of 3D character models during events have been removed for the most part. The opening scene is the best (worst?) example of this – while it was originally portrayed via an anime cutscene, it was completely replaced by a visual novel-style presentation, and this COMPLETELY ruins it. In the original PS2 version, the protagonist is heading to the dormitory for the first time when the Dark Hour begins, and unlike what P3P implies, he is completely indifferent to it. He looks up, sighs, and walks on like it’s nothing new. But in P3P, they say that it seems unusual to the protagonist even though it shouldn’t. The scene lost its dark mood and impact, and felt far less important as a result.

The scene during the first full moon is really bad as well, the main issues being that it felt extremely rushed and you don’t see Thanatos ripping its way out of Orpheus. The anime cutscenes from the original game weren’t very good, but omitting them was a bad call. What they really should have done is had them redone, even if that would inevitably drive up the cost of the game.

Where P3 had the actual character models moving around and doing things behind a visual novel-style presentation of dialogue, P3P brings everything down to the bare minimum. The visual novel style is retained, and backgrounds are replaced by static images, which feels very awkward. If someone were playing the game for the first time via PSP, they would likely not notice the issues, but going from the Ps2 version to this draws jarring differences to my attention.

Comparing the visuals further, the video quality isn’t exactly as good as the PS2 version, but it’s not bad either – to some extent, this paragraph might not apply to everyone because of how I viewed the games. Persona 3/FES on the PS2 had a native resolution of 480i (don’t quote me on that), but for the PSP it would have needed to be reduced to 272p. In terms of pixellation, the PS2 version looked a lot better on my TV than the PSP version does on my Vita; however, the Vita’s super-special-awesome screen really helps the colors to look nice and vibrant, much better than on the PS2. If the screenshots I have (via an emulator) are any indication, the screen makes a big difference. Even FES looked better than it does in the above screenshot.

A little addendum – on the Vita, you have the option to turn bilinear filtering on or off for PSP and PS1 games (basically, it smooths out the image a bit). When exploring Tartarus, the character models look extremely pixellated, but with the setting on, the edges of the character models look smoother, but definitely not as good as the PS2 version. Text also looks far better with the option selected.

While battles are mostly the same as they were in P3, there were some much needed changes. First and foremost, you now have the option to manually control all of your characters in battle! If you’ve had as many nightmares of Mitsuru using Marin Karin as I have, you’ll welcome this change. You also have the ability to guard attacks, which replaces the absolutely pointless “wait” option. Basically, all they did is retroactively add in a lot of things that were used in Persona 4.

So, overall – I am simultaneously pleased and disappointed with this game. If I were to play the male protagonist’s route again, I would do it (and plan to) via FES on my PS2. However, for the fresh appeal of the female route, I’m willing to overlook the shortcomings and take in all that P3P has to offer.

Compared to Persona 4 Golden, P3P is frankly not anywhere near as good of a port, and while the different console limitations can account for a large part of the difference, it’s hard to look at them side-by-side and justify many of the changes in P3P. Whereas P4G was able to improve everything, P3P suffered from necessary changes. If it weren’t for the option of a female protagonist with different social links, I wouldn’t have even considered buying P3P.

My recommendation – if you have a PS2, buy a copy of Persona 3 FES. If you have a PS3 (or PS4?), download FES from the PSN. I really wish that FES was available for download on the Vita (with proper widescreen support), as I would have no use for my PS2 copy as a result, and I generally prefer these types of games on handhelds. I understand why P3P is the way it is, but the result just leaves me disappointed.

However, if this game has accomplished anything, it’s that playing this makes me even more excited to see the Persona 3 movies – I just know I’ll fangasm when the new version of Burn My Dread plays during the opening credits. And unlike P3P, the movies look absolutely gorgeous.

The featured image was put together with sprites and art from the Shin Megami Tensei wiki – here and here. Screenshots from P3P are from YouTube user Jaydencats (since I can’t take screenshots of PSP games on my Vita), and the FES screenshot is from SuperJeenius.

Also, more color in the background thanks to a new image! Woohoo! I hope you like it compared to the old one. Because color!