Have you ever made curry? It’s a pretty simple dish, basically a stew of meat and veggies with a roux added in to bring the flavor of the various spices and thicken everything up. I never could have imagined that I would fail so much at making curry as I did in this game. Not that it actually matters too much, but it is a bit depressing, despondent, and woeful. 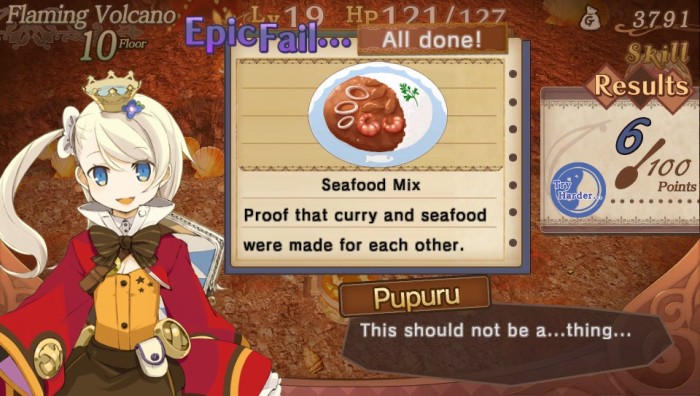 When I originally heard about a game with curry in the title, my attention was piqued immediately, and after its release I quickly checked to see what kind of ratings it had on Metacritic and elsewhere – the only user review on Metacritic basically guaranteed that I was going to buy the game.

So, on to the content of the game. The story follows Pupuru, a young girl who was suspended from her school and is now hoping to save a local curry shop by making the Legendary Magic Curry, which requires rare ingredients that are frankly pretty crazy – for example, one of them is taken from a monster called the ‘lavapotty shrimp.’

Pupuru is an energetic young girl dedicated to helping her friend’s curry shop, Smile Curry, and along the way she meets several eccentric people. Her main companion is Kuu, a white Pokemon/Kyuubey-esque monster who can’t say much more than his own name and will eat anything – literally whatever you throw at him. He’s also a pervert. 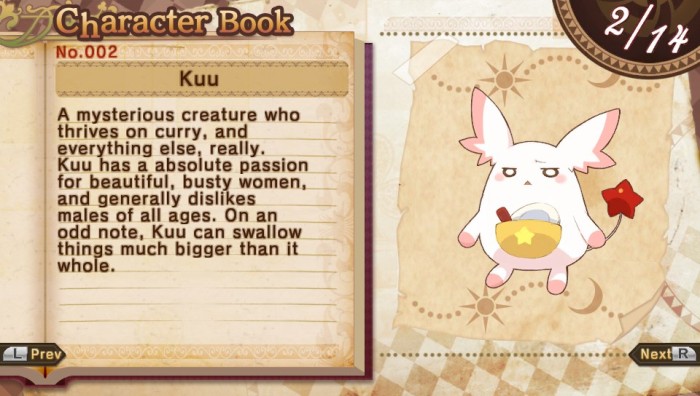 The other characters include Lilica, who is jealous of Pupuru’s “svelte, boobie-deficient figure,” Etanya, a self-described “humble, incredibly beautiful fortune-teller,” Puni, who can sense curry auras via her “Puni radar,” Gigadis, who hopes to make Pupuru his wife even though he sort of already proposed to another woman, Zeo, a mistaken pervert, and many others.

When dungeon-crawling, Pupuru and Kuu are the only ones to go along, and this is where the meat of the game lies.

The strangest thing about the dungeon-exploring system is actually what happens when you leave – Pupuru and Kuu are both set back to level 1, but you get to keep all the items you had. Every time you enter a new dungeon, whether for the 1st or 20th time, you will be at level 1.  This isn’t a problem as much as it’s simply an oddity. Rather than focusing on leveling your character for the long run, you need to focus on leveling your weapons and shields, which isn’t explained very well. Adding permanent buffs is simple enough, but weapons and shields can be leveled in two ways, resulting in something such as a shield called “Pure Heart Lv5 + 6.” However, if your weapon becomes unequipped, it may be stolen or eaten – I’ll explain how later.

At its core, the battle mechanics in this game are extremely simple – you either choose to do a physical attack or a magic attack, and you hit whatever you’re aiming at. Rinse and repeat. Unfortunately, many of the finer details are not explained. Each weapon or shield has a unique characteristic, such as “Seal ATK” or “Heal Shield,” but there is no way to see what it is that these characteristics actually do. Along with this, when you pick up a weapon or shield, it will normally have a vague name such as “Mysterious Sword?” or something along those lines, and the only ways to figure out what it is are by equipping it or appraising it with magic or a specific item. Unfortunately, if the weapon is cursed, you will not be able to unequip it until you leave the dungeon or remove the curse via other means. Even if you are able to unequip it, it requires opening the items menu three times, one time for each of these actions:

Rather than equipping a weapon, seeing what it is, and then choosing to equip another weapon, you have to follow a monotonous pattern to appraise new weapons and then re-equip another one, being forced to enter and exit the items menu three times. The lack of streamlining in the menus makes everything take longer than it should and feels like extremely lazy menu design.

Many of the enemies have very unconventional attacks, such as stealing a random item from your inventory, putting you to sleep before fleeing, or knocking your equipment out of your hand. In general, these aren’t too problematic, but paired with unfortunate circumstances, it can lead to losing your cherished equipment. If you happen to not have your ‘main’ weapon or shield equipped, it can be stolen. If your item is knocked from your hand, there is a chance that Kuu will eat it – this depends on him having the ability to eat whatever is laying on the ground though. Speaking of which –

Kuu’s role in the dungeon is pretty straightforward. He attacks enemies and follows you around (for the most part), but whereas Pupuru levels up from defeating enemies, Kuu both levels up and is healed by eating the food you give him. And this food will basically be whatever won’t fit in you inventory, whether it’s swords, staves, shields, or ingredients. As he levels up, he will learn new skills, but these won’t carry over to your next dungeon exploration. The skills he learns also seem to change every time,  as I didn’t notice a pattern or anything to it.

Now, onto what seems like the most important part of the game – making curry! Curry has great advantages, whether eaten by Pupuru or Kuu, as it boosts their health, stats, and gained experience temporarily. The higher quality the curry, the longer the bonuses last.

In the beginning, when making curry, you basically throw three things together and hope for the best – grains (rice), a recipe/ingredient, and a spice. If you’re lucky, you’ll get a good curry, but if not, you will get either a lame batch (such as the first picture at the top) or “cursed curry,” which you do not want to eat (it’s good for throwing at enemies though).

If you bring a recipe or ingredient back to Smile Curry, you will learn the curry recipe that corresponds to that ingredient. However, it doesn’t actually tell you which components to use – when making curry, there will normally be a silhouette of a dish with “???” accompanying it, but if you have the corresponding recipe, it will show the resulting curry before you actually make it. If, for some reason, it still shows the “???” and silhouette, it most likely means you will end up with cursed curry.  If you use things such as rotten rice in your curry, you will increase the chances of a bad batch, and specific combinations will net the greatest results – but it will not tell you what these combinations are. 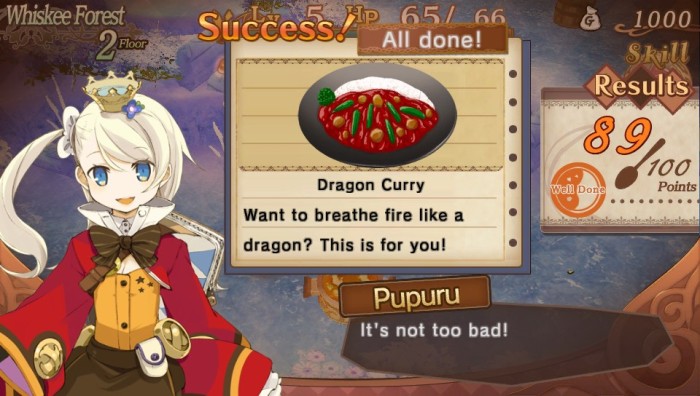 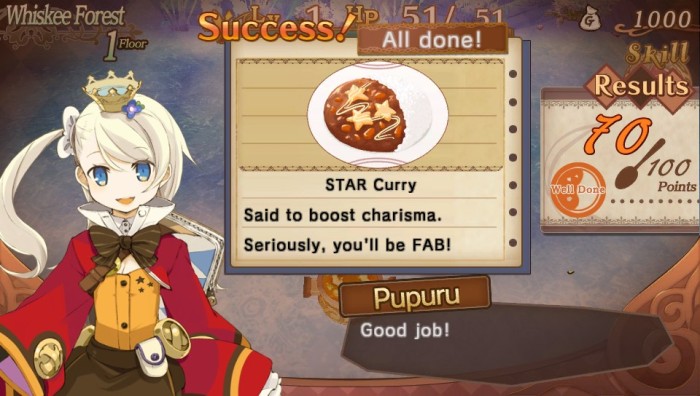 As simple as the game seems at first, it can end up being a bit of a hassle at times; however, it rarely gets extremely difficult, so as long as you don’t squander what you find or rush through, you should be successful. Fortunately, there are some challenges thrown into the fold. 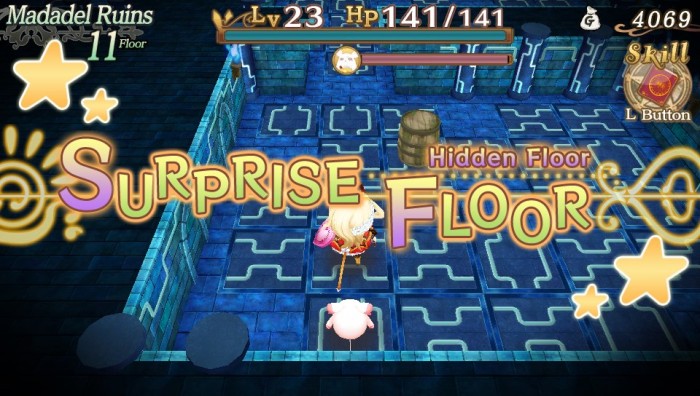 On “Surprise Floors,” there will be some restriction placed on Pupuru and Kuu, such as not being able to use items or skills, not being able to change weapons, having your equipped items cursed, etc. There are also times where you may stumble upon a “Monster House” and be swarmed by a large group of enemies.

That about sums up the dungeon-crawling aspect of the game.

Visually, the game takes a visual novel-style approach with presenting dialogue. In its VN styling, they made some strange decisions – for one, they don’t mirror the characters, which will sometimes lead to conversing characters looking in opposite directions. Also, there was clearly no effort put towards syncing lip movement to the character voices.

The characters and backgrounds are very colorful and look nice and clear on the Vita’s screen. While some of the outfits are quite odd (particularly Puni’s, you’ll notice it in the first picture below), they are generally not bad, You even have the opportunity to change Pupuru’s outfit for the dungeon crawling. Here are a few examples, both from dungeons and conversations: 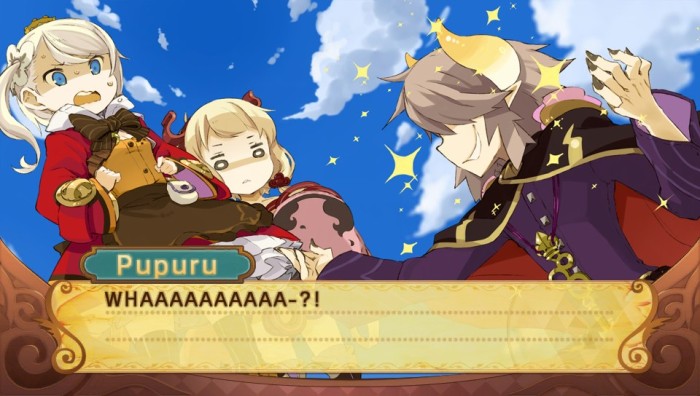 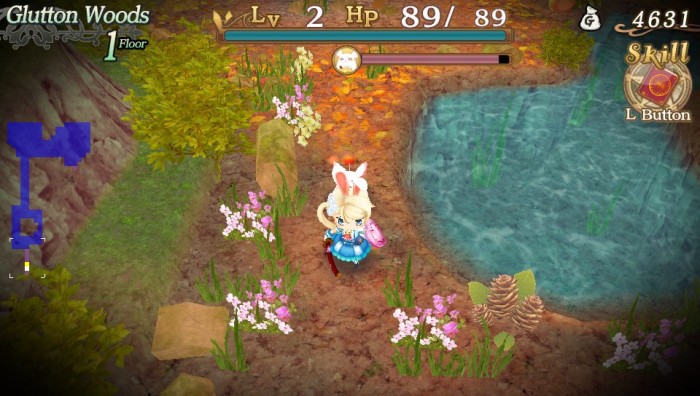 During battles with several enemies on screen, it is not unusual for the framerate to drop, slowing down the entire battle. Fortunately, these occurrences are not too common though.

Sound-wise, everything is very fitting. The music is normally very light and dreamy, but it can easily shift to a quirkier mood, especially when certain characters come into a conversation or a specific event is triggered. For example, Gigadis’ theme in particular is very strange. The lyrics (in English no less) go “I have so much love to give / I have too much of my love to offer / Will you be my queen?”

The voice acting is great, with all of the characters’ images and voices matching up perfectly. However, since there isn’t an English voice cast, the original Japanese voice acting may be unappealing to many people. Personally, since I’m learning Japanese and tend to watch anime subbed, it’s not a big deal for me. Some of the translations are very liberal, but it’s never too much of a problem.

There is a bit of bonus content/side missions in the game. After a certain point, you can take missions to seek out certain items or enemies, for which you will be rewarded. There are also some key items found throughout the game that lead to a short scene in the “Chara Theater,” where a short event will unfold involving the item you found. These events are completely separate from the main story and while not truly important, completionists and those who enjoy the humor should definitely spend the time going through them (you also get a bonus item for watching each of them).

If I had to point out the greatest flaw with this game, it would be that it seems very unappealing for most Western gamers – I am legitimately surprised that it received a proper localization.

Overall – 7/10
Recommendation – Buy used
While the game is fun, it is very flawed. I may make it sound like the game was a bit broken, but I was just pointing out worst-case scenarios that could potentially ruin the experience. My recommendation is to pick up a used copy if you can – the game is only a month old, so it will be at about the full $40 wherever you look to buy it new.